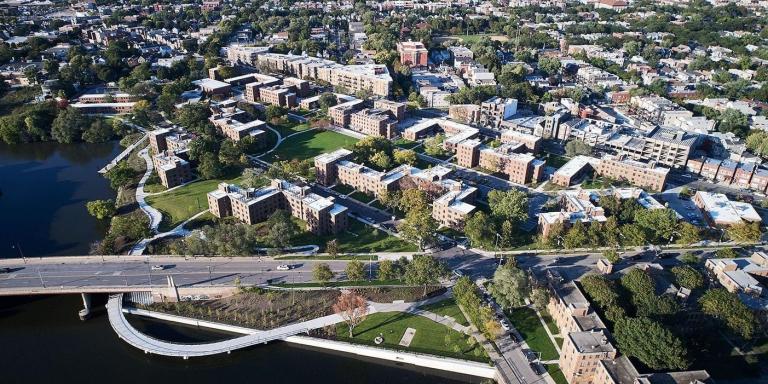 Chicago's Lathrop mixed-income community featured in BD&C
HED is very proud to share that the story of Lathrop is being told in a new feature from Building Design & Construction magazine. Formerly New Deal era public housing, a dedicated integrated team (including HED), converted the property into an updated riverfront mixed-income community. The following contains excerpts from the piece on Building Design & Construction. You can view the article in its entirety using the link below.

The PWA’s goal was simple: to reduce unemployment—then at 25%, the highest it’s ever been—through the construction of massive public works. Out of this bold initiative would come the Grand Coulee Dam, the Lincoln Tunnel and Triborough Bridge in New York, and hundreds of courthouses, post offices, hospitals, and schools.

A less well-known piece of the PWA’s work was the construction of 52 low-rent housing projects in the U.S., the Virgin Islands, and Puerto Rico. This was the federal government’s first direct effort at building housing, a task previously left to the states, cities, and philanthropies.

The fourth-largest of these PWA public housing communities was Lathrop Homes—29 low-rise residential structures, a power station, and an administration building nestled on 34 acres along the Chicago River, on the city’s North Side. The 925-unit community opened in 1938.

Ten years ago, after decades of neglect by the Chicago Housing Authority that left just 140 of the apartments occupied, the CHA issued an RFP to consider the future of Lathrop Homes—described as “one of the most architecturally significant surviving projects from America’s first phase of public housing.”

From this would emerge a plan to renovate and modernize 21 of the historic buildings, construct 12 new apartment buildings, preserve 17 acres of open space, create new linkages to the Chicago River, and add a robust menu of amenities. The Lathrop complex would eventually have 400 public, 232 affordable, and 494 market-rate housing units.

Phase 1A, completed two years ago at a cost of $200 million, saw the gut renovation of 16 of the historic buildings and construction of a new six-story structure, yielding a total of 414 apartments—151 public housing units, 91 at 60% AMI, 10 at 80% AMI, and 162 market-rate. Phase 1B, the $40 million renovation of two more historic buildings, is under way.

Amenities include a half-mile riverwalk and nature trail, a dog park, a children’s playground, bicycle storage, valet trash removal and recycling, maker spaces, 239 parking spaces, and a dock and kayak launch. There’s a woodshop collective on site. An independent Boys & Girls Club occupies private space at the edge of the property.

Eleven acres of open space, including the original two-acre Great Lawn, were carefully restored along historic guidelines by Michael Van Valkenburgh Associates, designers of Maggie Daley Park and The 606 trail in Chicago. MVVA added a kayak launch and circular dog park and improved connections to the Chicago River, turning what was once an eyesore into a community asset. 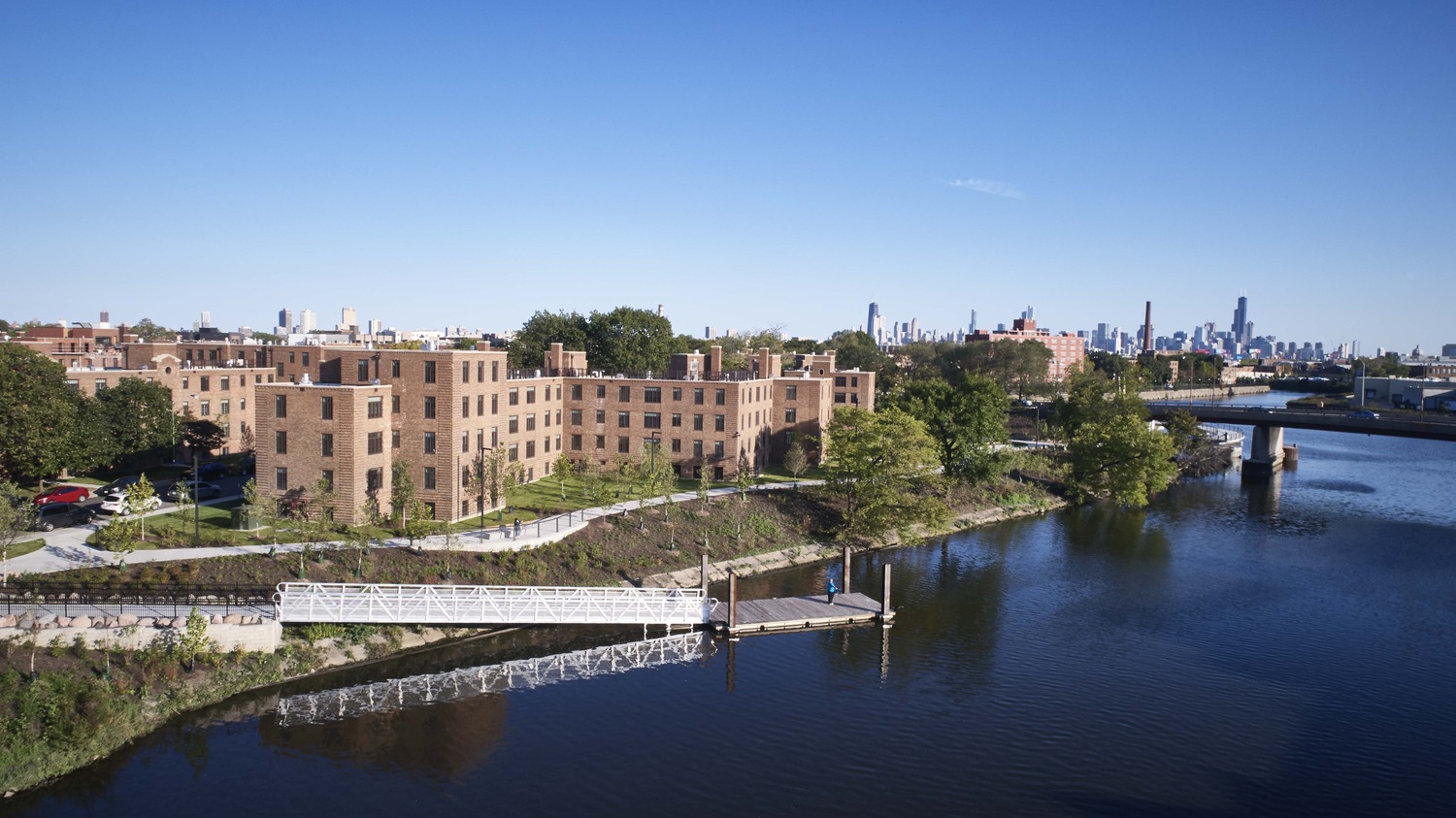 In 2000, the CHA issued a “Plan for Transformation,” which called for the demolition of 14,000 CHA apartments, including those at Robert Taylor Homes and Cabrini-Green, and the construction or renovation of 25,000 public housing units. A decade later, the CHA issued the RFP for Lathrop Homes.

“Lathrop was as complicated and long a process as any high-rise we’ve ever done, yet so rewarding. We were involved for years before we put a shovel in the ground,” said Ann Thompson, AIA, Executive Vice President of Architecture and Design at Related Midwest, which, with nonprofits Bickerdike Redevelopment Corporation and Heartland Housing, formed the development team, Lathrop Community Partners.

Protests and tense public meetings focused attention on Lathrop’s fate. Should all 31 buildings be torn down and rebuilt new? Should they all be preserved and renovated? Should Lathrop remain 100% public housing? Would that be financially viable?

On redevelopment, the CHA took the middle route: most of the historic buildings in the north portion of the site would be renovated, but those in the south would be demolished to make room for new buildings.

As for the tenant population, “the CHA wanted a mixed-income community—public housing, affordable, and market-rate. That was the program we were given,” said Thompson. And it was the only way the project was going to pencil out. “When you’re trying to align your financing, affordable is way different from market-rate,” she said. “You have multiple sources, all with different compliance and reporting requirements, which sometimes compete with each other.”

Adding to the complexity, in 2012 the National Park Service designated the site a landmark district. Exteriors and stairwells had to meet NPS preservation standards, which sometimes led to occasionally testy discussions with the historic preservation authority. “The NPS required certain type of glass for the replacement windows, but the glass didn’t meet the energy-certification requirements we were seeking,” said Thompson. “Even the type of brick we wanted to use to patch the walls had to be negotiated.”

Achieving ADA compliance for 20% of total units posed another hurdle since accessibility was not yet a right in 1938. The lack of elevators in the historic buildings led the team to adopt a “campus-wide access” strategy: 1) renovate the ground-floor units in the historic buildings to be ADA compliant, and 2) put the rest of the required ADA units in the new six-story building, which has elevators.

“The buildings were designed as walkups, and it would have been very tricky, if not impossible, to add elevators,” said Susan King, FAIA, LEED AP BD+C, LFA, Principal at HED, Executive Architect for Phase 1. “In terms of preserving the original character of the buildings, it’s fortunate that the campus approach was acceptable.”

“Lathrop shows how important it is to engage with residents in the community,” said Thompson. She credits Related Midwest’s nonprofit partner Bickerdike Redevelopment Corporation for their outreach and resident engagement efforts. Related’s aggressive community hiring strategy led to 44% MBE/WBE participation and 48% Section 3 hires, which far exceeded what was required. She noted that Bowa Construction and MIKK Construction, the GCs on the next phase, are both minority-owned firms. (MIKK is also a WBE/DBE firm.)

“Mixed-income projects like this are very meaningful to the city of Chicago,” said Thompson. “They are complicated to do, and require a lot of patience and resilience to execute on them, but in the end, their impact lasts generations.”

In the end, the Public Works Administration built just 29,000 units. Lathrop Homes remains one of its great successes, but the Lathrop of today is not the Lathrop Homes of 1938. Jensen’s kitchen gardens are gone; so, too, are most of the public housing units, replaced, out of economic necessity, by affordable and market-rate rentals. A reasonable compromise? As a nearby resident myself, I would say the overall improvements have been largely positive, but, as is always the case in this politically hypersensitive city, it depends on your perspective.

What has not been lost at Lathrop is its integral dignity and stateliness. As the National Park Service observed in designating it a landmark district, Lathrop Homes was never just a collection of buildings, but rather “a cohesive entity, designed as a unit, drawing character and strength from its consistency.” The new Lathrop preserves the refined integrity and cohesiveness of this gem of early garden-city planning, while polishing its luster here in the 21st century.