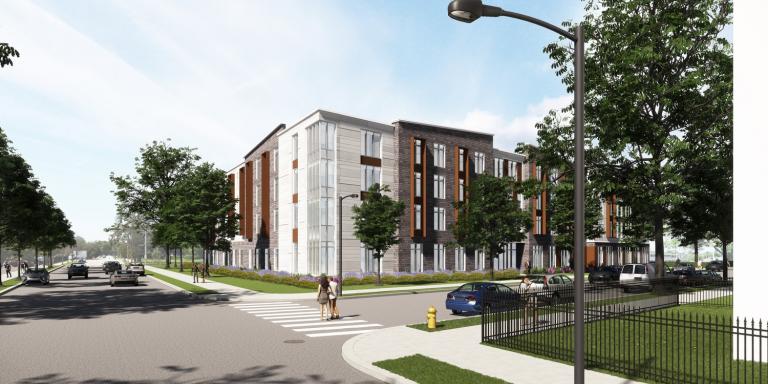 HED selected to design Veterans Housing in Chicago Heights
HED is pleased to announce that our team has been selected by The Housing Authority of Cook County (HACC) to design an affordable and distinctive refuge for the housing challenged veteran population in the Chicago Heights area to call home.

The proposed four-story building will be designed to coincide with Chicago Heights’ new mixed-use district regulations aimed at creating vibrant and walkable neighborhoods. The development will be located next to a proposed new town square, which would include a plaza space for public events, such as a farmer’s market, public ceremonies, and cultural activities for residents to enjoy.

HED’s design strategies include calm color palettes, quiet spaces with heightened acoustic requirements, and units and common spaces with open plans which provide visibility with no hidden corners. Designed to complement the historical character of Chicago Heights, the development includes 82 units, restricted to veterans only, totaling more than 74,000 SF. Building amenities will include exercise facilities, office space and meeting areas, and parking.