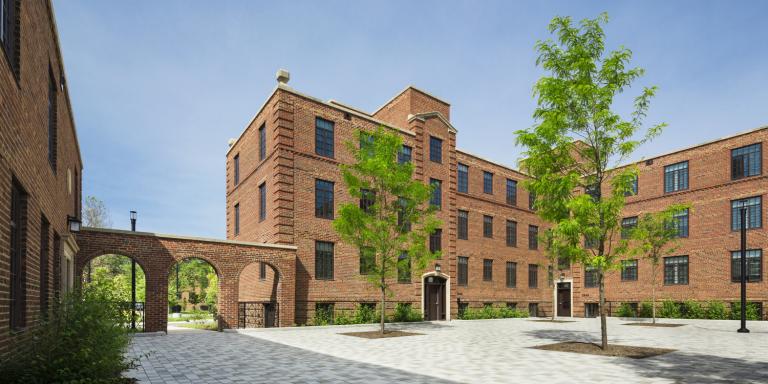 During the Great Depression, the Works Progress Administration (WPA) assembled teams of well-regarded architects to design much-needed housing for low-income families throughout Chicago. Almost a century later, one such development, Julia C. Lathrop Homes, is undergoing a comprehensive transformation.

For decades, the city of Chicago sought to redevelop the Julia C. Lathrop Homes, a 1938 Public Works Administration housing development that’s now on the National Register of Historic Places. With 32 buildings on 35 acres, the public housing development owned by the Chicago Housing Authority had fallen into disrepair by the early 2000s, and as the factories once around it were replaced by a shopping district, the Chicago River that its landscape abutted became an asset and not a polluted shipping canal. Many of the buildings were uninhabitable because of years of deferred maintenance. When Related Midwest and its partners Bickerdike Redevelopment Corp. and Heartland Alliance Housing won the RFP in 2010, a new approach was necessary.

Master planning began in 2010, and the project went through deliberate phases of design with community input throughout, led by the nonprofit developers. Phase IA totals roughly 500,000 gross sq ft of site improvements such as new utilities, the preservation of trees and the Jens Jensen-designed Great Lawn. Lathrop Community Partners and the city eventually settled on a mix of income distribution of 36% public housing, 22% residents that qualify as affordable housing and 45% at market rate for the development. All the housing units were built with the same finishes and level of quality, while all the public housing units that were lost during the redevelopment were replaced with other housing the CHA has in the city.

The HED team contributed its integrated design expertise and extensive housing experience to modernize the historic structures; incorporate health, wellness and sustainability strategies; redesign systems for efficiency and effectiveness; address accessibility; and provide LEED documentation for two additional structures on this site. The overall project has LEED and Green Enterprise Community certification, becoming one of the largest Green Enterprise Communities to date.